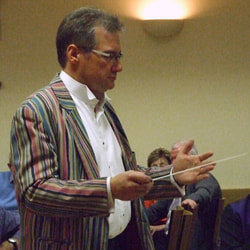 ​Although spending most of his life living in Kirkintilloch, Kenneth was actually born in St Andrews in the Kingdom of Fife.  He started playing the E-flat Horn at secondary school and quickly joined Kirkintilloch Junior Band. Two years later he changed to French horn but was still invited to attend the band (this time Senior Band) by their then conductor, the late David James.

"I remember the very first time I heard the band at full pelt (John Dickson, Jim Smith et all) in the old wooden band room beside the canal and thinking that it was such a great sound…"

He attended the RSAMD from 1976-84 (4 years junior, 4 years senior) and was awarded the horn prize in 1983 and 1984. He was the first horn player to play the Gregson Horn Concerto for French Horn and Brass Band in an Academy Post Graduate recital. 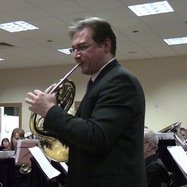 ​During his spell with the RSNO he performed in concerts with Pavarotti, Yehudi Menuhin, Barry Tuckwell, John Lill, John Ogdon and many other great soloists as well as "being fortunate enough to have recorded some fantastic film sound tracks" … Batman, Superman, Mission Impossible, Out of Africa … "far too many to remember", with their original composers, Gerry Goldsmith, Lalo Shiffron, Ron Goodwin, Elmer Bernstein etc.

Kenneth has also performed many times on television and is the horn player on the last series of Harry Secombe's "Highway" programme.
In April 2003 he left the RSNO to take up his present position as Senior Teacher in the East Renfrewshire Music Service.  Kenneth has given In Service Training, lectures and adjudicates and gives Master Classes throughout Britain.  He helped design the Kinder Horn for Boosey and Hawkes and still plays regularly.
​