History of the Band
1875 - Present
The Band was started in Smithstone, about ten years after the first families moved there in 1864. The families primarily came from the Airdrie, Rawyards and Chapelhall areas of Lanarkshire to work in the local coal mines being opened at the time by Wm. Baird & Co.

For the first few years the instrumentation of the band was far removed from the brass bands we know today. In fact, if you owned an instrument you were invited to play in the band. Gradually, over the years, it became all brass. Over the years the band gained in popularity and it was soon being called on to play at many of the local functions being held in the area.

In 1902 a new parish of Holy Cross was opened in Croy with Fr. Francis McCann as Parish Priest. Fr. McCann was quick to see the potential in the band and he approached the band to see if they would come under the banner of the new parish. Time went by and it wasn’t until 1908, under the negotiation of Fr. John Charleson, that the band became known as Croy Parish Band. Shortly after the change over Fr. Charleson appointed the band's first professional conductor, a Belgian Army man called Mr. Henry Fortyn.

The band has always had a strong tradition of supporting many local charities in the pursuit of raising much-needed funds. Indeed, during the 1921 and 1926 national strikes, the band played a big part in raising funds so as to feed the strikers and their families via the soup kitchens set up in Auchinstarry, Croy and Smithstone.

Following the band's centenary celebrations in 1975, a decision was made by the band committee to form a Junior Band to feed new players into the Senior Band and to maintain the long term future of the band.  To this day, we actively look to train new players.
​To date, we have qualified to represent Scotland at the National Brass Band Championships of Great Britain on ten occasions.  As Winners of the Scottish Third Section, we were due to take part in the finals at Cheltenham in 2020 but the event unfortunately had to be cancelled due to the 2020 Coronavirus Pandemic. 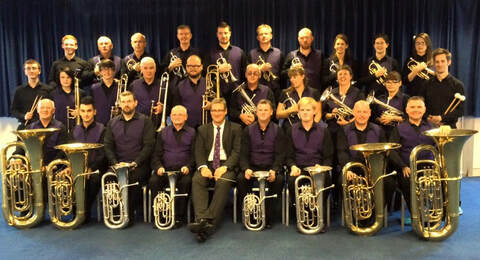